No doubt you’ve heard. Mercury is going retrograde and the usual suspects of communication complications line up for their turn to play tricks. The standard Mercury retro rules apply. Check facts and figures, paying attention to the likelihood of transposed numbers and such. Avoid signing contracts (sometimes it’s absolutely necessary, though) if possible. If a date to make the mega-deal must be chosen in the next month, then how about the 19th and 20th as Mercury aligns with the Sun and the Earth? One might ask, why does this day of unimpaired communication always take place on a weekend? Actually, it doesn’t, but it surely seems that way. As well, allow extra time for getting about town and add another 30% for task completion when involving the local print shop or office emporium and/or messenger services. As Mercury does his short term trend reversal thing, so does Pluto, but only for a few days longer. Presently he aligns with and energizes a collection of potent pulsars widely addressed in previous Galactic Times. The short of it, and to alleviate the need for plowing through archives, try to plan and project by assessing how much energy will be required for successful completion of an objective instead of thinking in terms of time. 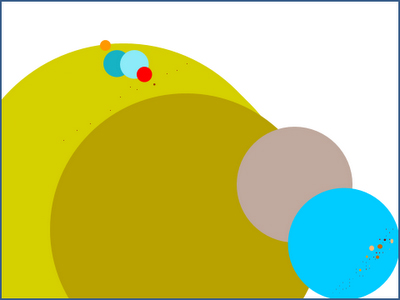 Mercury, as he retrogrades, tangles with Mars and Pluto for quite a spell. Curiously, there have been those posters carried by protestors at those volatile town hall meetings addressing the astronomical downgrading efforts of Pluto reading, “Who’s next? Mercury?” For such an influential and pesky sort, Mercury is rather small when contrasted to the size of the gaseous giants. Consider this planetary size comparison provided by Mike Brown (who graciously agreed to let me use the image he created if all of you promise to visit and sign up for his blogs. Of course, I said you all would... and you can read more of what I have to say on the matter on my recent Matrix blogs linked below).


Beside serving the beckoning of Jupiter, Mercury held the charge of leading the souls of the dead to the cusp of the underworld, thus establishing a well-rewarded relationship with Pluto. Whenever Pluto and Mercury tangle or tango, the need to make impeccably clear and conscious choices regarding one’s path and/or journey to the underworld for the good of the soul appears. Cosmic notes and cues pop out of nowhere and receive underlining, highlighting, and font enhancement, just to make sure they do not get missed. Sometimes with Mercury-Pluto tangos, a person must make a choice that will ensure successful soul enriching evolution and defies the linear logic of practicality.


Evidently we survived last week’s Mercury to Mars square on the 26th. At the same time, Mercury squared Pluto, too. Now with Mercury slow, Mars’ diurnal motion exceeds that of Mercury, so on Thursday (the 3rd), Mars overtook Mercury for a second square. Mercifully this M and M combo formed a wider orb to Pluto, possibly even a non aspect due to the diminutiveness of Pluto (except as reported by those experiencing it). These patterns imply that extracting any edge from critical and delicate communication serves the messenger and the scribe of the message. Agendas of changing another person’s mind fail and arguments without consideration of the point of view of others also tend to mire into muck. Objective, open-minded conversations with goals of win-win scenarios work masterfully and magically.


As the September winds down, Mercury will retreat back into Virgo, matching wits with the Sun and Saturn, stationing, tangling with Saturn again. Here common sense and critical thinking must prevail. Maybe we should even go back to those dusty science textbooks for a review of the logic of the scientific method. When starting to solve problems, such strategies, especially with Mercury and Saturn engaged, work far better than bouncing of the walls or in between the unknown answers of life’s multiple choice test. Not to worry, when Mercury wraps over the Super Galactic Center once back in Libra, those cosmic quantumplation trends naturally reboot.


Early October (the 9th) Mercury moves back into Libra where he immediately and smartly squares Pluto yet again. And again conscious choice becomes the theme. Decide what to do and do it because that’s what you chose to do. Mercury prepares to overtake Mars again... but not until November1st with Mars in Leo and Mercury treading on Mars’ rulership turf, Scorpio. If unfulfilled, those unclear on the protocol of conscious choices tend to look elsewhere to place blame unsuccessfully onto other. Part of the theme with Pluto is to reassume power and control over the circumstances of one’s life, which is a perfect fit for deciding how to approach life’s next bend consciously. The very next day Mercury comes onto Ceres. Any connection with Ceres involves Pluto and here the theme becomes, “get me out of this hell hole.” The “release me from these confines” agendas can extend from going GPS to work out of a traffic jam to making better career and/or relationship choices and picking a dharmic path that sticks. But no doubt, in this high octane reaction pattern, Mercury forwards text messages between the gods. Maybe that’s an idea worth tweeting.


So, what’s been going on with communication and/or the edge of communication since the 26th of last month sticks around until November, allowing important life decisions to be made without an unnecessary rush. Meanwhile, beware the rise in edgy e-mails and clear demonstrations of buffoonery by those unaware of the patterns.


A few curious Pluto notes seem appropriate given these patterns. This past week the Mount Wilson Observatory withstood (so far) raging wildfires in Southern California. This preserved an integral component in Pluto’s history of recognition, status and visibility. Wilson Observatory took the first photographic print of Pluto - in 1919. Post examination of the observatory’s photographic plates after Pluto’s discovery in 1930 found that little speck was no flaw... just a dwarf planet waiting for the perfect time to cast off the helmet of invisibility.


Pluto is the lord of great abundance and can equally represent greed. This past week an e-Bay posting of a platinum water mark poster of Pluto taken by Hubble appeared. The asking price? Only eight million dollars! Holy excrement, Pluto Man! The posting party alleges the plate was designed the day Pluto received the minor planet number 134340. Yeah, so? Originally, this print comes from a photo taken by Hubble’s Faint Object Camera credited to Alan Stern, Mark Buie, NASA and ESA. I sent the link to Mike Brown, one of Pluto’s planetary status assassins. He replied, “Only $8M? I want two.” To which I replied that was a prototypical Gemini (which is his Sun sign) thing to declare. It’s not greed. Geminis just like to have two of everything.


Okay folks, I have laboriously revisited my website’s store, reformatting the reformatted buttons Pay Pal dropped on their users last year. Now every button should work flawlessly. You can try to break the buttons by buying if you like. And given the mentally twisting turns of transits, it’s probably time to get over the fence into consultation land in case you’ve been hedging.