The journey from Tucson requires holding a vision of the adventure assumed to lie ahead. Battling the freeway traffic of Tucson where there are virtually no entrances or exits downtown due to eternal freeway construction, the road signs for I-19 leading to Nogales seem more distant than the Sombrero Galaxy. Finally, I-19 and a quick turn on the Ajo Highway and in the distance, scores of miles away, hints of mountains shrouded in lingering rain clouds hold promise of adventure on the horizon. Slowly, traffic and population wane as saguaros, century plants and telephone poles adorned with hawks increase. Past Ryan Airfield and most of civilization sans the United States Immigration Border Patrol checkpoint, the distant hills draw nearer. “Funny,” I thought, “with all the open space out here a space ship could easily land while wanting to converse with the astronomers of Kitt Peak. But could the aliens get past the Border Patrol?”


At last clear of one set of jagged, cloud shrouded peaks, the Kitt Peak complex appears atop the next mountain jutting out of the Sonoran Desert; now only twelve miles separate me from the destination. In the last dozen miles the road twists and turns around Kitt Peak with steep inclines, along high drop offs and offering panoramic vistas - if not driving, of course. As the summit nears, some 6,875 feet above sea level, the various domes, dishes and antennae magically appear surrounded by jagged stones, green trees and a far more vivid blue hue to the sky. The air chills noticeably, especially following the winter rain of last night and the lingering clouds. In fact, the observatory looked down on many of the puffy clouds passing by that morning. 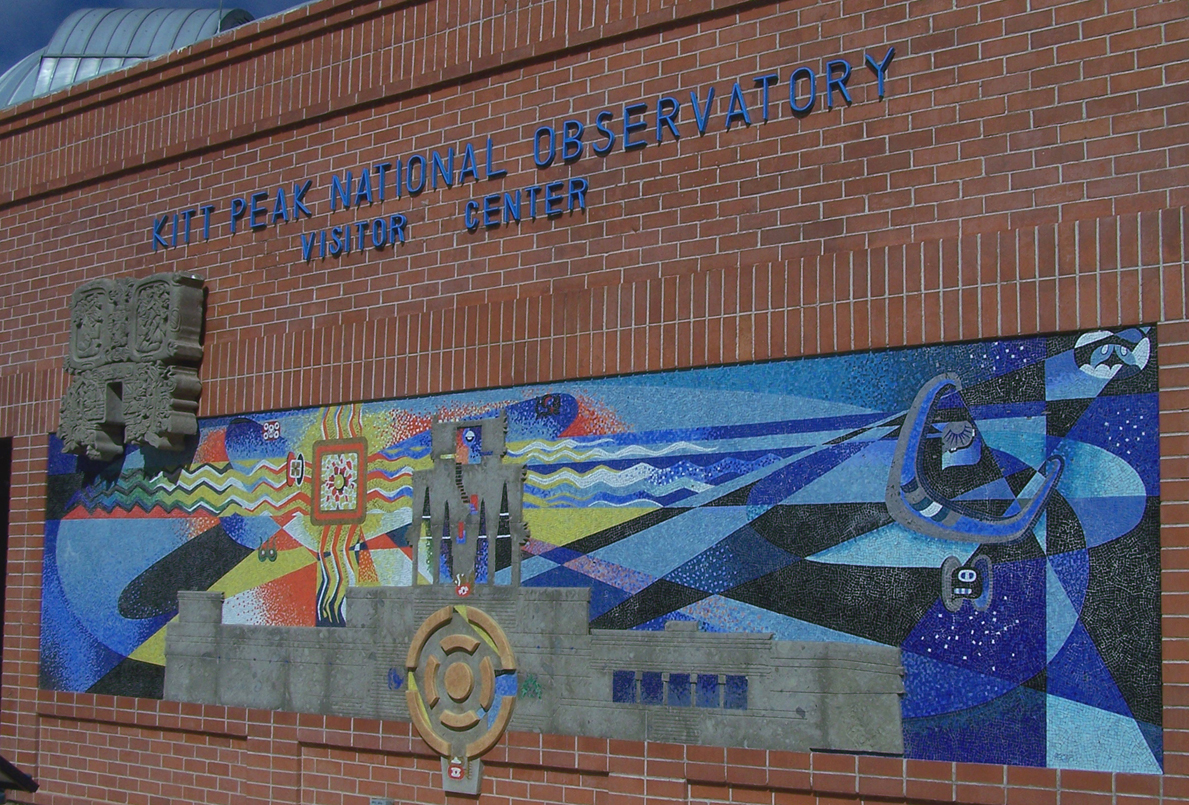 During the day, the grounds are open. Unless part of a tour, you’re free to walk about, visit three telescopes and enjoy the sites. It’s a friendly place. Upon approaching the entrance various signs welcome you. These signs offer insight as the University projects involved, declare 2009 the Year of Astronomy, note the 50th anniversary of Kitt Peak (actually 2008) and warn you to be on the look out for snakes. Not today. It’s too cold for the reptiles. Also greeting you is a fabulous mural created by the Tohono O’odham natives. The observatory complex takes up 200 acres of the nation’s reservation and their art work is for sale in the gift shop. The locals have a fabulous name for the astronomers with whom they share the Mystery of the Heavens on this glorious mountain; they call the astronomers “long eyes.” 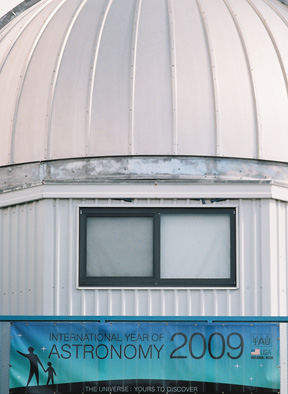 It’s very cool that 2009 is the Year of Astronomy. Why shouldn’t it be? Since 2003 we’ve received three dwarf planets, Sedna, upgraded Ceres, observed Comet Holmes (which several observers confirmed was not blue - that was color aberration in prints), discovered new Super Novas, tracked objects potentially hazardous to Earth, and discovered another curious co-orbital asteroid, 2009 BD (There are at least five of these asteroids sharing an orbital path with Earth, at least for a while). A long time ago we as astrologers were also astronomers. Now it seems they have forsaken us and in return, we have forsaken them. It’s time to heal and why not during the Year of Astronomy. We should reach out across the expanse of space to our “adversaries.” In reality, if astrologers cannot keep up with astronomy, as a group we appear as superstitious as the intellectual elite accuses us of being. Perhaps we should be the ones to take the first step. Perhaps that step comes from building empathy.

You think being an astronomer is easy? To get to work you must navigate winding, often slippery and full of fresh rock fall roadways. You must battle altitude. This can induce fatigue, disorientation, respiratory difficulty and more. On top of Mauna Kea where the astronomers work at an elevation of 13,500 and sleep at 9,300 they battle blizzards as well as the altitude. The altitude consideration is so extreme at the Hawaiian Observatory, no one is permitted to sleep at the summit and they must work in teams of two, in case of incapacitation. It’s not that high on Kitt Peak. But it does snow, and it can snow a lot. Not only must an astronomer navigate hills and steep pathways, they must shovel snow and keep the walkways sanded. The air is thinner, making the summer heat of Arizona more intense. Solar exposure is more of an issue. Oh yeah, in Arizona the summer winds known as the monsoons bring in ferocious thunderstorms (notice the lightning rods on the Welcome Center) that sport blazing lightning and body-shuddering reverberations of thunder.


Also a summer hazard, as signs throughout the property remind you, snakes prevail and may be present day or night, so keep your red flashlight handy. Given many astronomers work the night, dormitories provide refuge for sleep during daylight hours. That is, if the astronomers can sleep as school children babble about their future career in space exploration and visitors excitedly chatter about the amazing telescopes and equipment as well as the dazzling view of Arizona and Mexico no matter which way you look - south for Mexico, of course.


By necessity, the observatory, one of the best equipped in the world, must be self-sufficient. They have their own emergency/fire station, air raid/warning sirens, repair equipment, snow plows, gas supplies, a helicopter landing pad and the endless supply of clear nights for extraordinary viewing. Oh yes, there are tons of telescopes and scientific devices. This is the world’s largest collection of optical telescopes. There are twenty-four of those and two radio telescopes 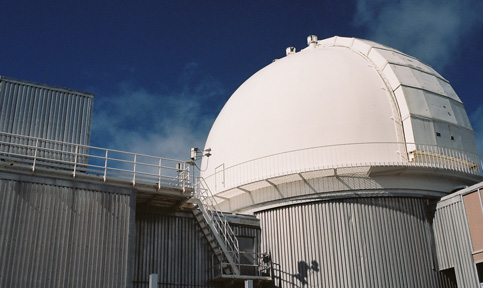 After huffing up the walkway to the 2.1 meter telescope and into the telescope’s foyer, you’re greeted by snow shovels. And for absent-minded astronomers is the sign bearing the reminder to return the shovels back to where they belong. From this telescope’s point of view, you can see for miles and miles and take in the magnitude of the vast number of telescopes, including the highly inclined Solar Observatory. The National Solar Observatory overlooks a tennis court/basketball hoop recreation area in obvious decay and decline. By no means does this imply that the astronomers decay and decline in physical body. You observe joggers, evidently locals, taking on the steep hills, a noble feat at such elevation.

As you walk around the grounds, a sense of “un-groundedness” overwhelms you. It’s not so much the thin air that causes your chest to labor. It’s a combination of factors. Kitt Peak is a sharply rising, stand-alone mountain. Around you there’s not much sense of foundation. While the beauty of the desert southwest can take your breath away, the height and edge of the land upon which you stand can tantalize body sensors. Add to that the absolute brain power located atop this mountain, which is enough to add to a buzzing sensation. At any given time, Mensa could hold a spontaneous party and nearly everyone on the mountain would be admitted. Then there’s the electronics. As you walk through the telescopes, the hum of electronics, crisp chirps from status indicators and the stature of the gear brings to mind every science fiction movie ever seen. Truly, this place is out of this world. Energetically sensitive individuals continue to resonate to the Peak’s frequencies for days, resulting in an odd meta-stability of body tiredness and brain wave hyper-activity. 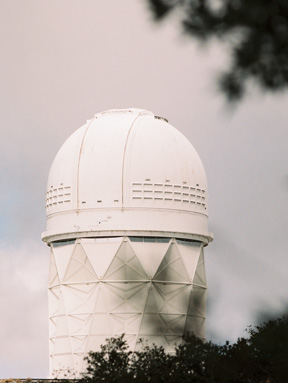 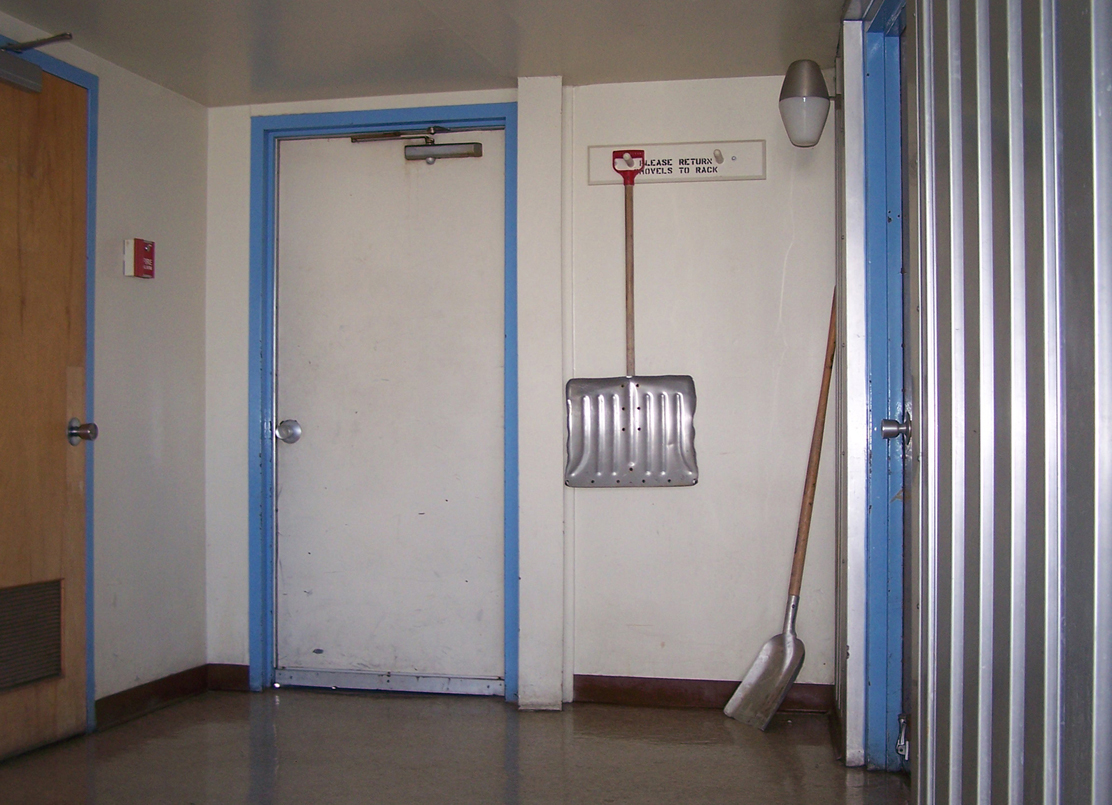 Perhaps the most overwhelming region to tour is the effort required to tour the 4 meter, Mayall telescope, the tallest and most photographed dome on the grounds. As you walk closer to the enormous housing, you pass by ironic warning signs reminding you of the steepness of the road you took getting up here in the first place and also the slipperiness of the roadways during inclement weather. The road to the Mayall passes the 2.3 meter Bok reflector, part of the local University of Arizona’s program. You walk directly next to this large scope up a steep roadway, circling the Mayall facility. Once there, a look up past the ten story foundation to the catwalk can overpower your senses as clouds racing by give the impression of extreme speed.


Eagerly you pass through the automatic door, seeking the way to the observation deck above that stands just below the actual telescope. With the feel of navigating a maze you find your way to the elevator. For a moment it’s reassuring. No view of the outside offers a quick respite from elevation and altitude awareness. Then the elevator ascends; as it does the motors increase in pitch as if struggling and making a most disconcerting set of sounds. Finally, the doors open and you can walk around the scope platform, higher than any point on the mountain and take in a virtually unlimited omni-directional view. Whoever decided to install handrails under the windows deserves a medal. These help a tad in offsetting dizziness and vertigo. You may also proceed into the belly of the dome and view the powerful telescope, waiting its time of day. This is an amazing thing. You can gaze at this potent instrument, that according to the official website:


Wow, all that and a great view of Arizona, too.


After departing the Mayall Telescope structure, things seem more stable once back down on the lower mesa. “Funny,” I thought, “though Lowell Observatory is relatively equal in elevation to Kitt Peak, it’s geography and towering Ponderosa Pines prevented the disorienting sensations of being atop Kitt Peak.”


A final stop at the visitor’s center is a must. Where else can you get the Night Sky version of Monopoly, a notable chunk of meteorite, a cool flashy laser pointer thing, an enormous coffee mug and a woven basket image of the Man in the Maze? However, upon coming back to the visitor center, a docent had set up a telescope for solar viewing and another to gander at Venus, now sporting a distinctive crescent phase. As I approached, others spoke of seeing Venus with the naked eye - there at 2:37 P.M.. I quickly looked up and locked onto the shimmering planet celestially sailing the sea of blue sky. It had been a long time since I had seen Venus so. I remember doing just that in October 1957 while my dad attempted to reassure me that Sputnik was not a threat. It’s funny, but that event returned so clearly to my mind while looking upward fifty-two years later.


Should you venture to Arizona and claim to honor the heavens, set aside some time to check out the land of the “long eyes.” It’ll change the way you look at astrology and the sky above.


Check out the live webcams and please enjoy the websites of both Kitt Peak Observatory and Lowell Observatory, five hours north in Flagstaff. Meanwhile, enjoy the rest of the photographic tour to follow:

Flying above the clouds... 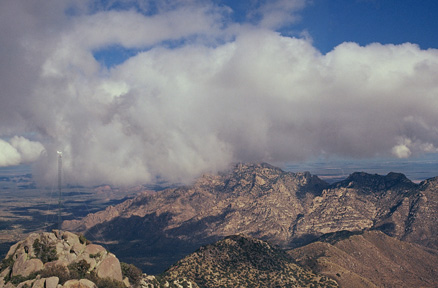 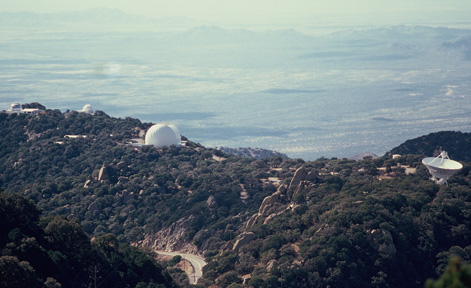 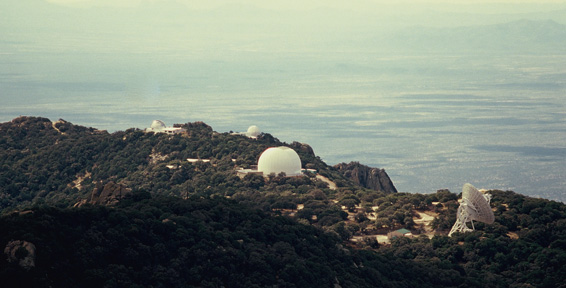 Oh what a road! This astronomy thing can be a slippery scope. 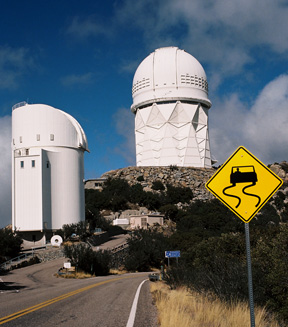 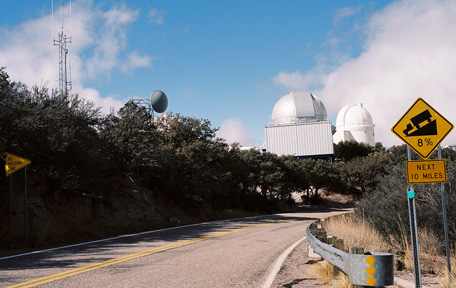 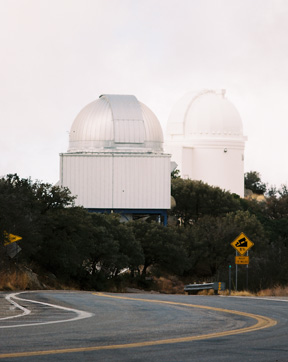 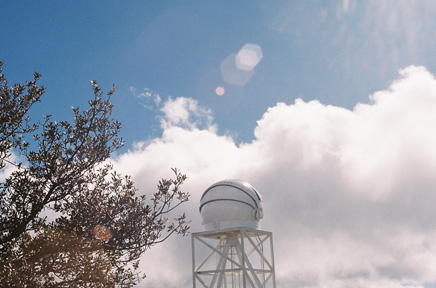 The Fabulous Solar Telescope and Its Century Plant Companion...        And More of the Solar Scope... 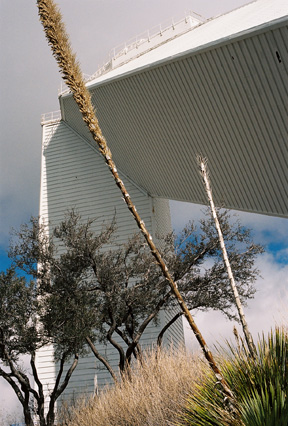 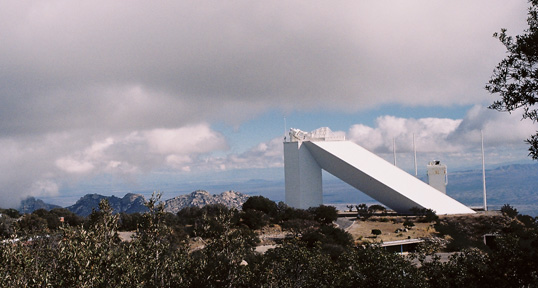 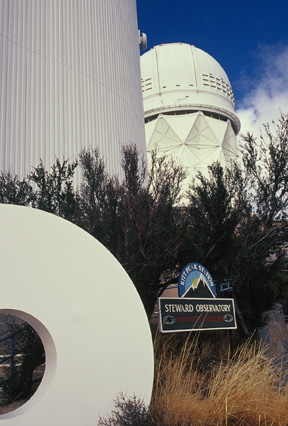 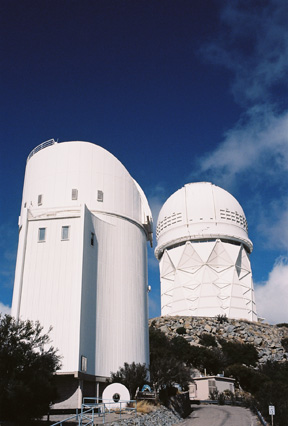 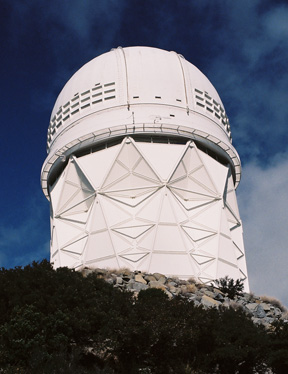 There's a Whole Lot of Scopes... 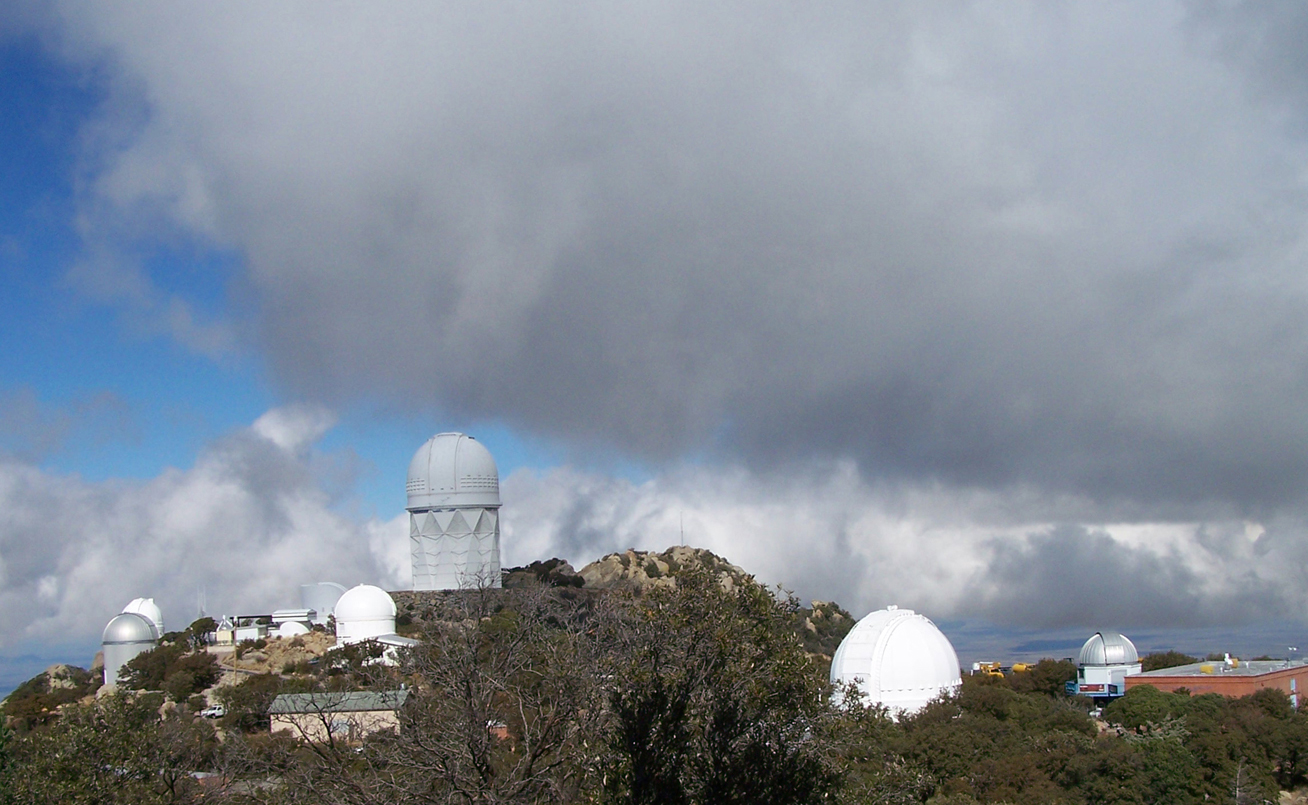 And as seen from the Mayall Telescope... 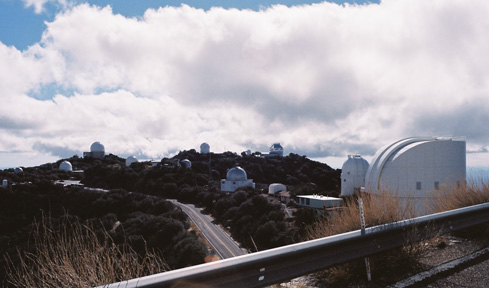 Snakes?? Oh and other hazards, too! 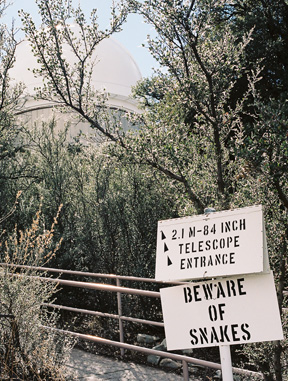 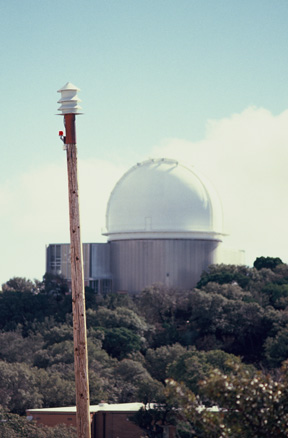 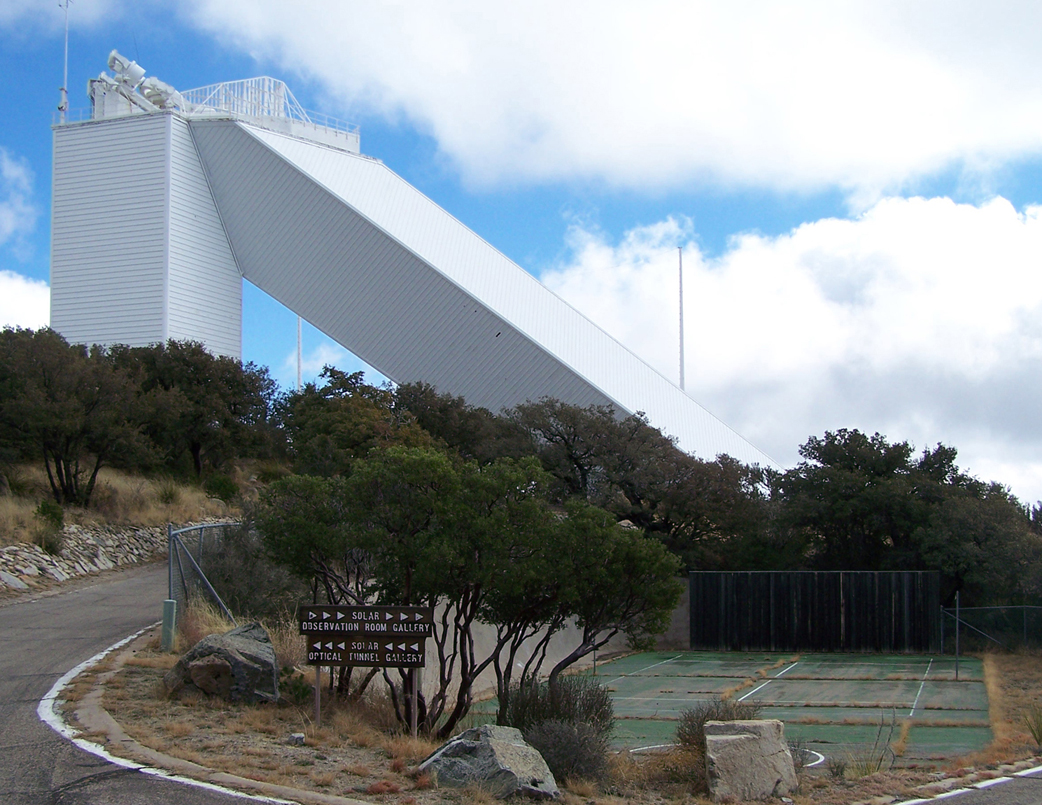 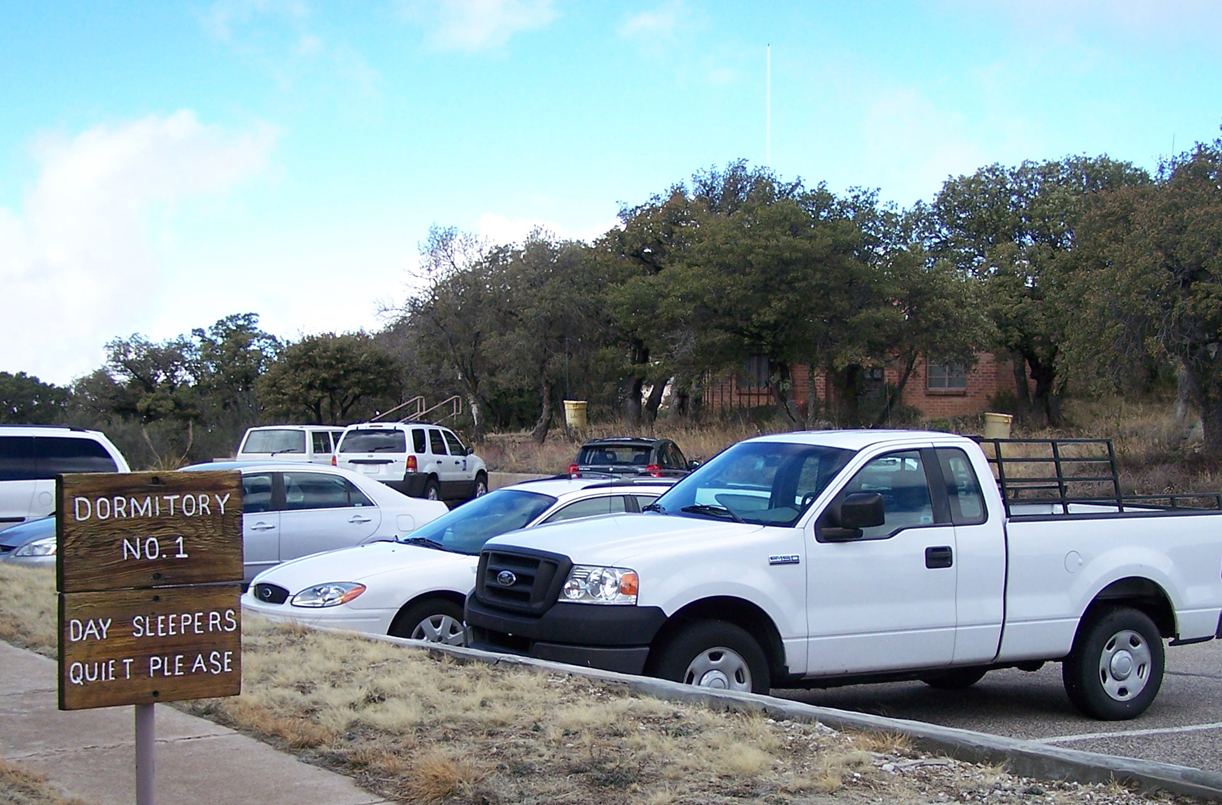 Hints of Yesteryear... no, that's not a UFO, some sort of lab anomaly on my slide. 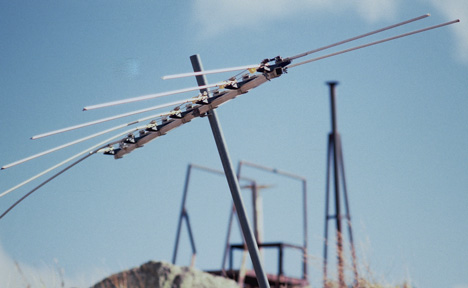 More Scopes... and for the record, not all scopes are round. 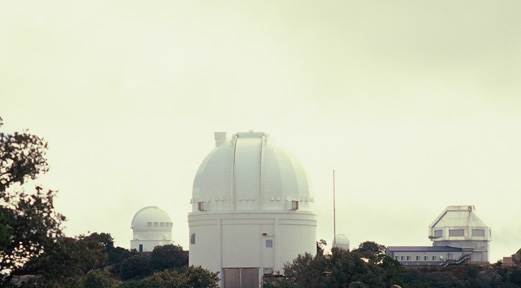 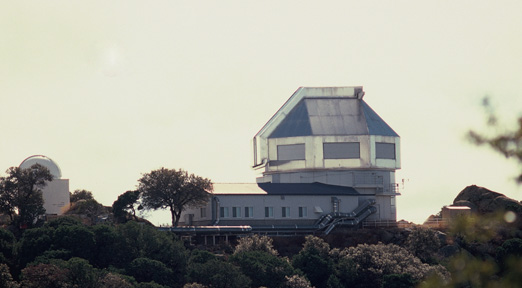 Public Outreach, After all, It Is the Year of Astronomy! 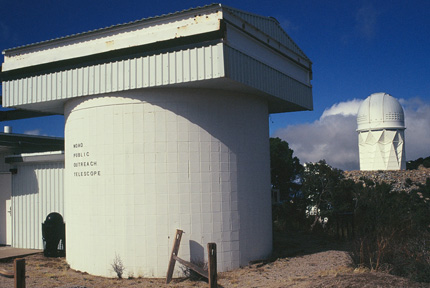 And finally, my cat, Saguaro, helps with Kitt Peak research... 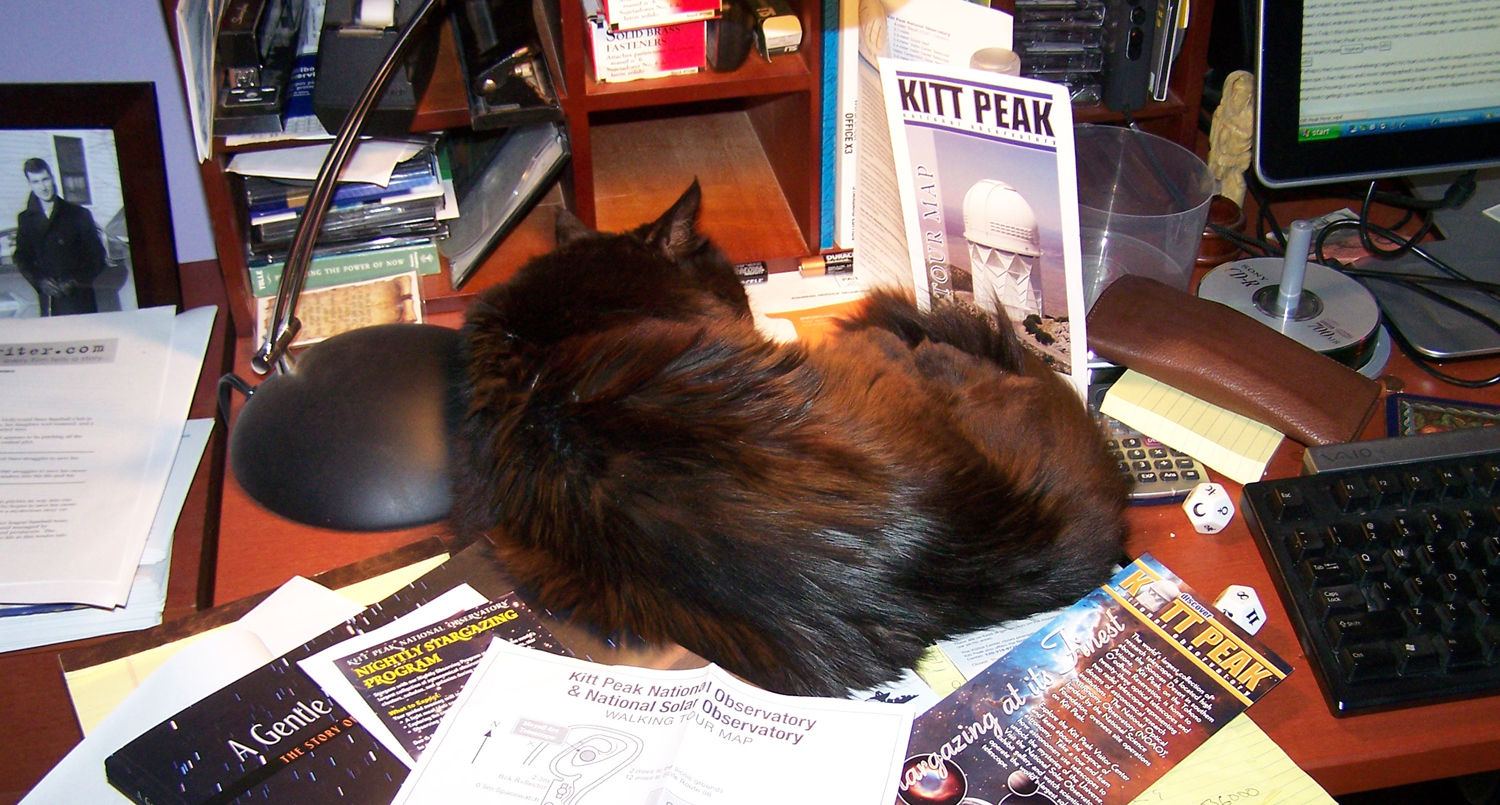